I've been trying to memorise the folding sequence of some traditional models and in particular the 'lover's knot' diagrammed here by David Petty. 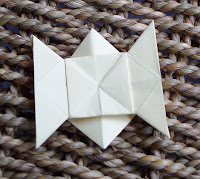 It has a very pleasing final step which 'knots' the paper so that it cannot be easily undone. As you can see it also produces 6 points or tabs, some of which can be opened into pockets.
This could make a great module I thought, so I folded 2 knots from the same size paper and started to look at how they could connect with each other. Several ways became apparent but this one seemed to offer more possibilities, at 90 degrees and with a very firm connection: The point of one covers the other and when pushed follows its line, finishing at the centre of the central square: 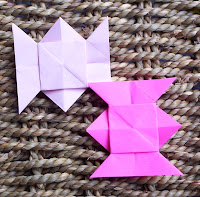 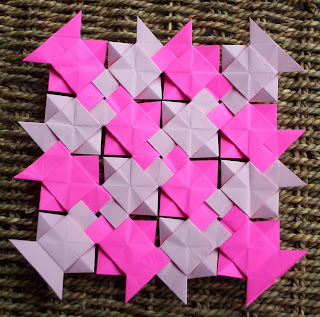 Different colour combinations at the joining point are possible with this 2 tone example if you vary which tab goes into which pocket.

Very pleased with the result, I then thought about using the units to create a polyhedron: The join is at 90 degrees so a cube should be possible. So 24 freshly folded units later and a lot of fumbling produced this: 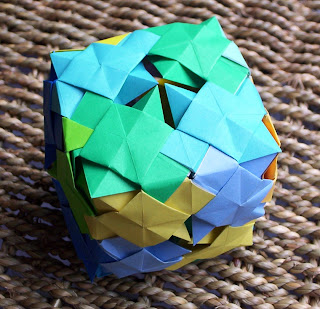 Connecting the last face of a cube was quite a struggle. If you're tempted to push your finger through the central square where the 4 loose points meet, it becomes a finger trap!!
Two extra mountain folds are inflicted on the knots where the points bend over to the adjacent 2 sides but they can be soft folds which gives a somewhat puffy appearance to the cube and this way the integrity of the original model isn't really lost.

If you don't mind about this sort of thing you can also push those loose points all the way back into the corners inside the model like this: 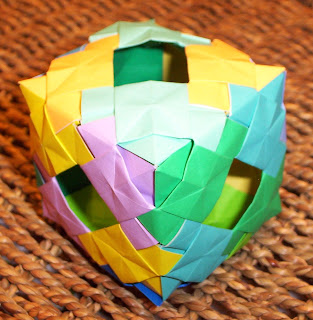 Can anyone think of any other model in origami which can be used as a unit in this way without any modification?
Posted by Matthew Hayward at 1:45 PM 6 comments: 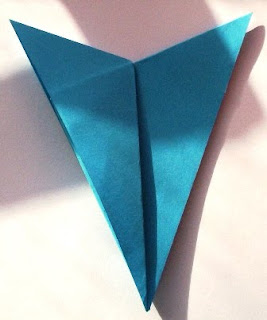 I mentioned a "Butterfly" lock in my last post but don't remember ever seeing the move explained as a technique in any origami book so you may be unfamiliar with it, or perhaps just know it without naming it.
Difficult to explain in words, a sort of a 'crimp' combined with a 'sink' - here is a diagram. 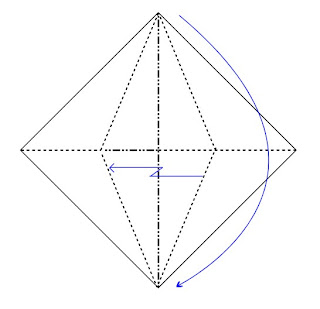 So in this example a fish base is collapsed along both diagonals with two of the creases reversed all in one step. When complete the model should look like the stylised butterfly photographed above. It could of course be collapsed in a mirror image with the flap inside pointing the other way.

There are 2 other models I can think of which use this move to great effect:

Would love to hear if you know any other models which use this technique. 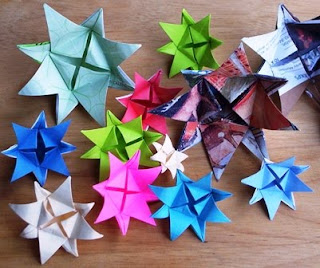 I came up with this model while doodling with a windmill base. It's fully 3 dimensional as you can see from this back view. 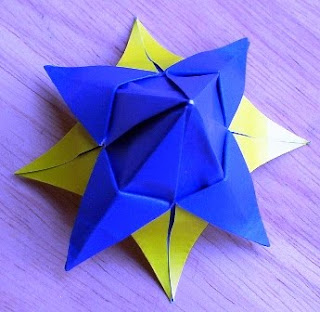 The folding sequence includes 4 'butterfly' locks which create a cone shape. There is something strangely satisfying about a butterfly lock (maybe I should get out more!): you make a few creases, fold the edge to the centre incorporating a crimp and you have an instant neat 3D model.

This is a fairly simple design so can be made from all sizes (the ones pictured are from 8.5cm to 15cm squares) and all types of paper even thin magazine pages . I found it difficult to decide what to do with the triangular flaps which cover the centre. I finally decided to curve them upwards and inwards to give the impression of a split seed pod. 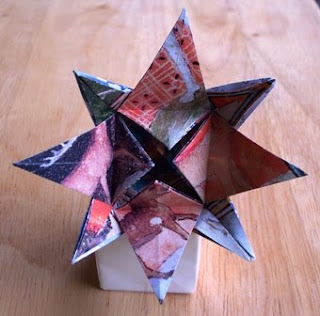 The fact that it originated from a doodle and is not a deliberate attempt to imitate Nature made it difficult to choose a name for the model but I stumbled across a picture of a curious looking fungus called an earthstar and although not entirely similar the name has a good ring to it so "Earthstar" it is.
Posted by Matthew Hayward at 11:11 AM 3 comments:

Cat proof Origami?
This was my daughter's Christmas gift to her kitten Mitzi: a stellated octahedron made from Sonobe units. Mitzi (short for Mittens not Mitsunobu!) doesn't look too impressed but I'm sure it will grow on her. It contains a bell but we may have to replace that with food treats to encourage her to appreciate it fully!
Posted by Matthew Hayward at 12:47 PM 1 comment: 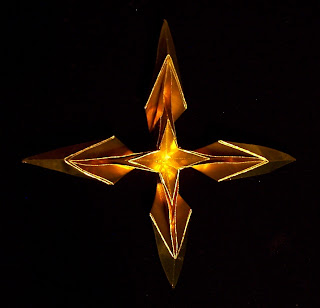 Here's a star I designed a couple of years ago. It reminds me of the ones you see on Christmas cards with extended "twinkles" so I though it would be appropriate for this time of year. It's folded from a windmill base also known as Froebel's basic form. I drew some diagrams which weren't meant for an audience and probably aren't the clearest you've ever seen, so let me know if you get stuck. I suppose the trickiest bit is the first open sink but if you prepare it well in step 7, it shouldn't be too difficult.
Happy Christmas everyone!
Posted by Matthew Hayward at 10:14 PM 2 comments: 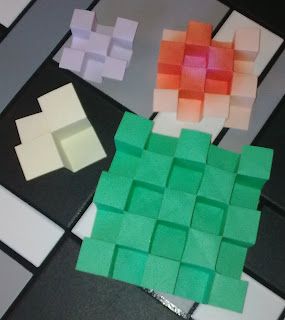 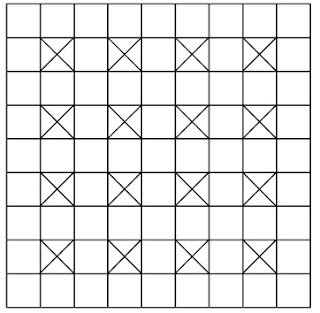 Fold all the grid creases both ways (mountains and valleys) as this will make the collapsing easier.

Then add the small diagonal creases shown in the crease pattern. You can valley these from the colour up side as only 1/4 of each set will become a mountain.

Then comes the fun part. I recommend you start from a corner and complete an outside edge first.

If you're not used to working from crease patterns, start with an easy 3 x 3 grid which will give you a model like this. 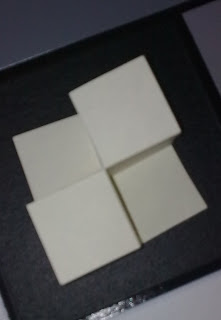 Then you can move up to five, seven, nine and so on. 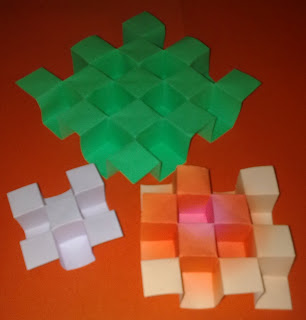 Best thing is there is no set folding sequence, as with most tessellations, you just have to feel your way towards the finished model.

If you use thin paper the model can curl up at the edges, I clamp the 'locks' underneath with small paperclips for a few hours which helps. You could also dampen the model and put a weight on it but not too heavy and not too wet otherwise you'll end up with a soggy coaster!!
Posted by Matthew Hayward at 12:48 PM No comments:

It's been a while but encouraged by other excellent origami blogs out there, and a new camera, I'm going to try to post updates a little more regularly.
I've been keeping busy going through my ever growing collection of books and BOS magazines and following the Origami community on-line. There is so much out there...
I've also created a few things of my own since I last posted: a bird, a braided button and a 3D tessellation.
Information and photos of these and more soon.
Posted by Matthew Hayward at 9:30 AM No comments:

MATTHEW HAYWARD FROM DORSET IN ENGLAND

The purpose of this blog is to record my thoughts on origami, catalogue my ever changing favorite folds and show my designs to the world. I hope also to encourage other paper folders in my area to share their interest and maybe, who knows, even start some local meetings.